(Source: Diane Bailey, Wind Power Monthly V20 N3 March 2004) While Canadian wind power developers installed a record 90 MW of new capacity in 2003, perhaps the best indicator of the industry’s vitality lies in what is yet to come. By the end of the year, signs were strong that wind may finally be entering the period of sustained growth producers have been waiting for. “I think the prospects look very good, says Robert Hornung, president of the Canadian Wind Energy Association (CanWEA). “We’ve had a record year this past year, but I’m quite confident that 2004 will break that record and the year following will break it again.” A scan of the political landscape shows that Hornung has grounds for optimism. Ontario, one of North America’s largest power markets, is looking for 300 MW of renewable energy to be in service as soonn as possible, the first step in its plan to have 10% of all generating capacity come from renewables by 2010. Bids in Hydro-Quebec’s massive 1000 MW wind power request for proposals are due in June, while in Saskatchewan, the government-owned utility plans to meet all new load growth to 2010 with clean energy technologies, including 150 MW of wind. Next door, Manitoba Hydro utility has allocated 250 MW, nearly 5% of its current generating capacity, to wind development and is studying how much additional wind can feasibly be added to its hydro-dominated grid. In British Columbia, the government has decreed that half of all new power is to come from clean sources. Several provinces are also considering a renewables portfolio standard (RPS) in their electricity marketplaces. An RPS is regulation for a standard minimum amount of renewable energy in power supply portfolios, facilitated by a flexible system of tradable renewable energy credits. In Nova Scotia, the provincial government recently accepted the recommendation of a stakeholder task force calling for a target of 5% renewables by 2010, while Prince Edward Island has set a goal of at least 10% over the same time period. Alberta is aiming for 3.5% by 2008 and a larger, longer-term objective after that. New Brunswick says it will enact an RPS when it restructures its power market in the spring, but in the meantime New Brunswick Power has set its own target of 100 MW of wind by 2010. While Newfoundland’s isolated grid has more than enough supply to meet demand until the end of the decade, the government is still planning to move ahead with a 25 MW wind demonstration project. Up north, Nunavut Power is in discussion with two groups about a long term wind development program for the northern territory.weblink: Wind Power Monthly • from: Wind Power Monthly • in detail XlnkS66D XlnkC18FB

From Canadian Consulting Engineer October/November 2003 by Gary Bolton, P.Eng, Chair Association of Consulting Engineers of Canada Our magnificent planet has a finite amount of energy. Recent media coverage continues to raise concerns about global warming and receding icecaps. As engineers, we will continue to play a key strategic role in the development of sustainable, energy-efficient projects for the future. Clients are requiring, rightly so, “sustainable” and “green” buildings. While these terms are interpreted differently by each of us, focus and definition for the initiative are now being provided through the LEED Canada Building Rating System presently being developed across Canada by the Canada Green Building Council. I had the honour of attending the Council’s first board meeting at the end of July in Vancouver. Their membership development is strong, government support at all levels is growing, they have assembled a strong, diverse, national board, and initial cross-Canada training sessions were scheduled for this October. ACEC strongly recommends that our member organizations and firms consider participation in this worthwhile and timely initiative. Because of our diverse, and often severe climate, many of the recommended design, construction, operational and maintenance elements of the program have been addressed and incorporated into projects for many years. We now have the opportunity, and responsibility, to raise the bar for sustainable projects through innovative strategic planning with the entire design team early in a project’s life. While not all the LEED rating components carry a higher initial capital cost, we also have a duty as engineers (and taxpayers) to continue to promote to clients and funding agencies a decision-making process which is based on life-cycle costs; not just first capital costs. Some progress is being made in this regard, but we have a long way to go. The core of our business is problem solving, and the increasing need for more efficient, environmentally friendly projects will require all of us to develop the necessary skills (such as LEED) for delivering our engineering value to the client. • from: Canadian Consulting Engineer • in detail XlnkS667 XlnkC18F5

The Seabird Island Project, located in British Columbia five miles north of Agassiz on the Fraser River, is the first of its kind in the world. While other research and prototype developments have advanced the concepts and principles of sustainable housing, the Seabird Project has assembled a whole range of strategies, new technologies, innovations, and new products to demonstrate an integrated approach. A member of the Sto:lo First Nation, the Seabird Island community contains 1,943 floodplain hectares, of which 730 hectares are cultivated. The remaining 1,213 hectares are used for residences, community buildings, forestry, rights-of-way, and economic development projects. Project planning and design for its new, sustainable housing development began in May, 2002, and is now at over 65% completion. The Canada Mortgage and Housing Corporation (CMHC) Assisted Housing Department has partnered with Indian and Northern Affairs Canada (INAC) and the Seabird Island First Nation, along with many sponsoring suppliers and manufacturers, to demonstrate a new way of financing and building affordable housing projects. The Seabird Island units have largely been financed by the regular NHA Section 95 program for social housing on-reserve, and will be rented to band members who have been on a new housing waiting list for a number of years. One of the housing units will remain open for tours and public education over the next two years. • from: Architectural Institute of BC • document: Architecture BC – Seabird Island • in detail XlnkS603 XlnkC189B 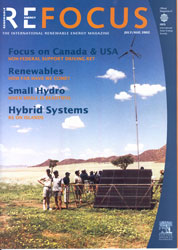 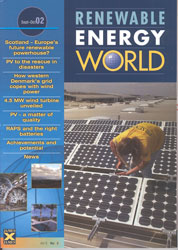 Renewable Energy World is a magazine publisher quarterly. A comprehensive and authoritative source on renewable energy technology and services. Copies of the magazine are circulated free to qualifies professionals or otherwise available on subscription. A must read to anyone professionally involved in renewable energy.weblink: jxj.com/magsandj/rew/index.html • from: James & James • in detail XlnkS4AF XlnkC1833