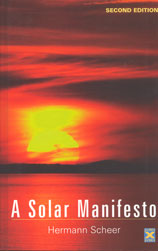 In the decade since the ‘Earth Summit’ in Rio de Janeiro, the response of the world’s governments and authorities to the threats to the global environment has been to enforce the reduction of energy consumption and harmful emissions – solulions primarily based around conventional energy resources and conventional thinking. The question is, though, whether this strategy is radical enough to address the key challenges now facing the environment, and whether it can be effective in avoiding catastrophe on a global scale. For Herman Scheer, the answer is a definite no. In this fully updated edition of A Solar Manifesto, he once more attacks the lack of political will to find answers outside a conventional frame of reference. Climate change, pollution, deforestation, destruction of the ozone layer, poverty and the population explosion are all problems created or exacerbated by the use of conventional energy. Seven years after the first edition of this book, answers are now more urgently required than ever, as current policies serve merely to alleviate the escalating symptoms rather than attempting a cure for what could become a terminal affliction. Herman Scheer shows that this crisis may yet be reversed – but it can only be made to happen through a fundamental change in political and economic strategies, paving the way towards a global solar energy economy sustained by new social principles. A Solar Manifesto champions the replacement of fossil and nuclear fuels with solar energy, as a real solution to the threat to the environment and associated social consequences. Scheer constructs a radical yet innovative political and economic model and argues the case with passion and conviction for the global solar economy as the route to a sustainable environment. Thought-provoking and profoundly challenging, this book will be an inspiration to anyone concerned with energy and the global environment. • from: Hermann Scheer • in detail XlnkS609 XlnkC18CD