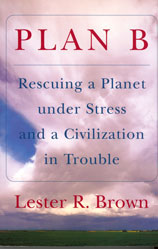 Modern civilization is in trouble. We have created a bubble economy, one whose output is artificially inflated by overconsuming the earth’s natural capital. Nowhere is the bubble economy more evident than in the food sector where the world grain harvest has been inflated by overpumping aquifers, a practice that virtually guarantees a future drop in production when aquifers are depleted. The wakeup call may come soon. In China, where water shortages are already shrinking the food supply, the grain harvest has fallen from 392 million tons in 1999 to 340 million tons in 2003. Within the next year or two as its grain reserves are depleted, China’s 1.3 billion consumers will begin competing with U.S. consumers for U.S. grain. Given China’s trade surplus with the United States of over $80 billion and strong buying power, this has the potential to drive up food prices worldwide. The resulting political instability in food-importing countries may convince us that business as usual-Plan A-is no longer a viable option. The alternative is Plan B-a worldwide mobilization to stabilize population and climate before these issues spiral out of control. The goal is to stabilize population close to the United Nations’ low projection of 7.4 billion, to reduce carbon emissions by half by 2015, and to raise water productivity by half. Lester Brown puts forth a workable blueprint that can be enacted now. Plan B: Rescuing a Planet under Stress and a Civilization in Trouble is a way of sustaining economic progress worldwide, an alternative to continuing environmental deterioration and eventual economic decline. • from: Lester Brown • in detail XlnkS608 XlnkC18CC